This summer was a little less busy than most, in performance terms, for a variety of reasons, but now things are picking up.

This year I created a new production – Behind the Sofa – a sci-fi puppet show. This performance was developed for the event Sci-Fi Weekender in Sheffield in March, and thankfully went down well. I’ll be performing it again at their next event in November, and I’m hoping it will be booked by other sci-fi events too.

I’ve just been telling stories of wizards, witches and fantastical creatures for a Harry Potter event which was fundraising  for Cancer Research. It was wonderful to tell the tales to audiences mostly dressed in assorted Harry Potter related costumes.

With Halloween coming up I’m looking forward to telling Creepy Tales and Welsh Folk Tales at the Blaenavon Ironworks, a Cadw site near my home in South Wales, for several days. Then it’s back to Sci-Fi Weekender for more Behind the Sofa shows, and then Christmas is coming…along with all the shows that go with it!

Next year is shaping up nicely too, with invitation to perform at more Cadw sites, and Port Erin Arts Centre on the Isle of Man, as well as at Folk on the Lawn and in local schools. 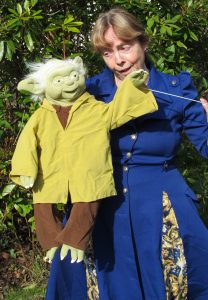 I have a few public performances coming up this summer, if anyone wants to catch a show.

My other exciting news is that I’ve been booked to perform a brand new set of stories at Sci-Fi Weekender X in North Wales next March. This will be a geeky Time Travel Tales set, which I’m in the process of creating. It’s going to be fun building the puppets to use with this one!

Well, it’s been a busy few months, and my work has taken me to all kinds of wonderful venues. I’ve performed at a number of Festivals, including the Settle “Festival of Happiness”. 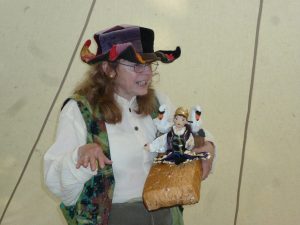 As well as performing under canvass in the morning, I did my first story-telling walk….in the wettest and most thundery of conditions. Amazingly people turned up for the event, and even seemed to enjoy it! 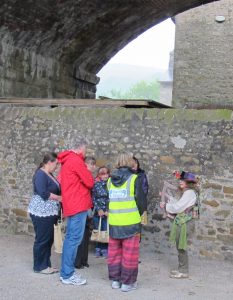 We did have to take shelter under a railway arch at one point, and trying to keep the puppets and my little harp safe and dry was a challenge…..but I’d love to do another story walk….especially in the dry. 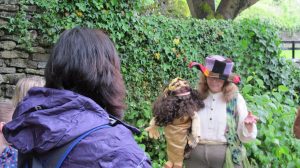 It did stop raining eventually.

I was fortunate enough to be asked to perform at Celtfest, on the Isle of Man, always my favourite island, and it was lovey to have the excuse to visit it again. 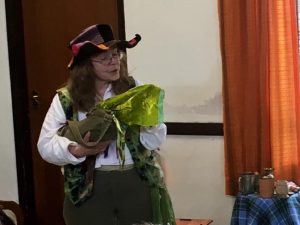 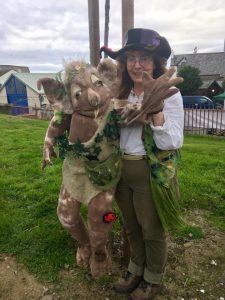 I also had the opportunity to perform at Ludlow Fringe Festival, Greenwood Forest Park and Stackpole Walled Gardens…..all in all a busy and enjoyable summer. Now I just need to plan my autumn diary.

Fiona is also a writer, of novels as well as folktales.

In addition she builds puppets not only for her own work, but for other people’s too.

The Heart of a Monkey

Puck and the Wedding Dress